Brazil’s President Jair Bolsonaro was released from the hospital Wednesday, two days after being rushed for emergency treatment of a partially blocked intestine.

Bolsonaro, 66, spoke at a news conference with his medical team before leaving the Vila Nova Star hospital in Sao Paulo, saying he was ready to get back to work and would maintain his agenda.

It is the latest in a series of health problems since the far-right leader was stabbed in the abdomen during the 2018 election campaign that brought him to power.

Bolsonaro’s hospital stay came as he faces tough elections in nine months’ time, with his approval rating at an all-time low.

The president, who was on a New Year’s holiday at the beach when his abdominal pains started, was still in vacation garb as he addressed the media: the maroon jersey of Sao Paulo football club Juventus.

But in a no-nonsense tone, he said he was ready to get down to the business of 2022, the last year of his four-year term. “All my scheduled events will be maintained. I’ve got a trip to the northeast this month, to Rio de Janeiro, to Russia in February…. I’m going to continue as normal,” he said.

“It’s hard to sit around doing nothing. Life goes on,” he added, saying he would “try to follow” his doctors’ advice: a restricted diet and limited physical activity.

Doctors had initially said Bolsonaro could need an operation.

But after placing him on a liquid diet and emptying his stomach through a nasogastric tube, they said Tuesday the blockage had been eliminated without surgery.

Lead surgeon Antonio Luiz Macedo said Bolsonaro was in “very good health” and “ready for work,” though he added that future episodes of the same sort remain possible.

Doctors say Bolsonaro’s stabbing and resulting surgeries have left him with abundant scar tissue in his abdomen, which can clog the intestines.

The president had last been hospitalized in July with the same problem, which gave him a case of persistent hiccups.

On that occasion, too, doctors placed him on a liquid diet and decided not to operate.

Bolsonaro will now be on a “special diet” for a week, with advice to eat slowly, chew his food thoroughly and go for walks but refrain from intense exercise, Macedo said.

Bolsonaro has undergone at least four surgeries stemming from his stabbing at a campaign rally in September 2018, perpetrated by a man who claimed he was following God’s orders.

His attacker was ruled mentally unfit to stand trial — though Bolsonaro and his inner circle have long alleged a left-wing plot. “What I’m worried about now isn’t my agenda, it’s my security,” Bolsonaro said before leaving the hospital.

“We know the left are aggressive, how they’ll stop at nothing to eliminate their adversaries.”

Bolsonaro regularly tears up when speaking about the knife attack, which nearly cost him his life.

Despite losing 40 percent of his blood, he survived and went on to win the presidency that October, fueling supporters’ die-hard faith in the man they call “Mito” — “The Myth.”

Bolsonaro’s aura of invincibility has faded since then, however.

His polarizing style continues to rile up his far-right base, but he has lost crucial support among the political center and business sector.

Bolsonaro faces widespread criticism over an economic recession, high inflation and unemployment, and his handling of Covid-19.

He has insistently downplayed the coronavirus and flouted expert advice on containing it, even as the pandemic has claimed nearly 620,000 lives in Brazil — second only to the United States. 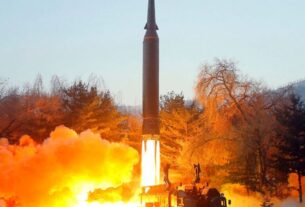