The setback (Hiren quitting party’s WhatsApp Group) for the State BJP unit came after six BJP MLAs left the ‘West Bengal BJP WhatsApp Group’ in the last two months after they were not given any prominence in the revised ‘State Committee Members’.

On January 3, BJP leader and Union Minister of State in the Ministry of Ports, Shipping and Waterways Shantanu Thakur left the ‘WhatsApp group’ citing reasons that Matua community leaders were not given any prominence in the revised ‘State Committee Members’, district president, district-in-charge, Bibhag-in-charge and Bibhag convenors’ list announced by the State BJP President Sukanta Majumdar on December 23.

Speaking to News18, Hiren said, “I felt that I am no longer required by the State leadership. They don’t inform or invite me about party meetings and other important schedules. They avoid meetings when I am in my constituency (Kharagpur Sadar in West Midnapore). They fix meetings in my constituency when I am in Kolkata while keeping me in the dark. Therefore, I have decided to disassociate myself from the ‘West Bengal BJP WhatsApp Group of MLAs’.

Hiran Chatterjee is a Bengali film actor and Member of the West Bengal Legislative Assembly from Kharagpur Sadar.

He is also associated with an NGO which provides aid to visually and physically challenged street children.

Hiran was elected as a member of the West Bengal Legislative Assembly from Kharagpur Sadar (constituency). He defeated Pradip Sarkar of TMC by 3,771 votes in the 2021 Assembly election.

West Bengal BJP President Sukanta Majumdar claimed that he is not officially aware of Hiran’s exit from the ‘West Bengal BJP WhatsApp Group of MLAs’.

He said, “One may have grievances and for that, they should discuss the matter with the party leadership.”

Commenting on BJP leaders quitting the ‘BJP’s WhatsApp Group’, TMC MP Saugata Roy said, “After the Assembly poll debacle, BJP is in a state of shock. State BJP president is an educated person but he is not a good politician. We always maintained that BJP can go to any extent for power. The party leaders are realizing this and therefore they are quitting the WhatsApp Group. I think in future there will not be any existence of BJP in Bengal.”

After the appointment of Sukanta Majumdar as the new State President (replacing Dilip Ghosh) – organizational change was required as the party was witnessing a large number of leaders, MPs, workers switching camps and moving towards the ruling TMC putting the party leadership on the back foot. However, the step failed to yield any fruitful results as party leaders

to express their discontent against the decision-makers in the party.

UP Polls 2022: Candidates with Criminal Backgrounds to Speak Before Media, Voting Time to be Extended, Says EC 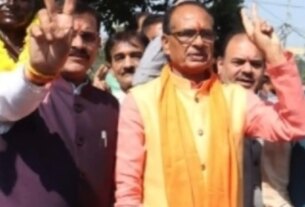