You may have heard of the Bajaj Qute, a quadricycle that you probably mistook for a car. Being the first quadricycle that was developed in India, its characteristics resemble both of a car and a three-wheeler and was supposed to be a replacement for cars in intra-city journeys. Although that is yet to happen, the modest vehicle is apparently all set for international fame as it will be seen in the upcoming Hollywood flick, The Lost City which will release in March this year. The movie stars Channing Tatum, Daniel Radcliffe and Sandra Bullock in leading roles while Brad Pitt makes a special appearance.

The Bajaj Qute was spotted in the trailer of the movie for a few seconds, during which the Bajaj logo has been hidden, hinting that it is not a paid product placement. The quadricycle was probably used because of its functional purpose. In the trailer, Tatum drives the vehicle through the jungle with Bullock as the passenger which is ideal, because of its compact size. Later, when Bullock tries to open the door, the Bajaj Qute falls off a cliff and is destroyed, drawing hilarious reactions from the both of them.

The quirky looking Bajaj Qute has a width of 1312 mm, height of 1652 mm, a wheelbase of 1925mm and an overall length of 2752 mm. Riding on 12-inch wheels, it features black ORVMs and a single windscreen wiper along with rear taillights. Upfront, highlights of the quadricycle include projector headlamps and a plastic-clad bumper.

Its biggest advantage is its ability to easily squeeze into tight spaces because of its size which also leads to relatively hassle free parking. On the downside, there is no air conditioning. However, the quadricycle tries to make up for that by having a huge glass area which makes the cabin airy. The flexible motor runs on multiple fuels including CNG, LPG or petrol. In petrol guise, it churns out 13 bhp at 5500rpm and 18.9 Nm of torque at 4000rpm. 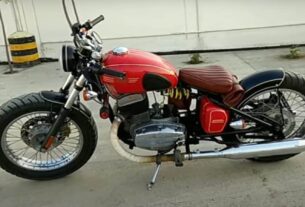 Yezdi Adventure Launched in India at Rs 2.10 Lakh, Here’s Everything You Need to Know