Kolkata, Jan 14: BJP leader Roopa Ganguly on Friday demanded a CBI probe into the derailment of the Bikaner-Guwahati Express in West Bengal’s Jalpaiguri and claimed there had been no “bad news” about trains for years, but just ahead of assembly polls an accident has occurred. Uttar Pradesh, Punjab, Manipur, Uttarakhand and Goa are going to polls from next month.

West Bengal BJP president Sukanta Majumdar, however, said there should be no controversy over a human tragedy and the cause of the accident will be known once the probe is completed. At least nine people were killed and 36 injured after 12 coaches of the Bikaner-Guwahati Express went off the rails near Domohani in Alipurduar subdivision of Northeast Frontier Railway (NFR) on Thursday. Some of the coaches overturned or were found mounted on top of one another.

“Can the train get derailed on its own? Does the rail track understand the polls are due soon? There had not been any bad news about trains for years. A CBI probe should be ordered. One should not play with human lives,” Ganguly said in a post on her official Facebook account. According to the NFR, 1,053 passengers were on board the train at the time of the derailment.

Earlier in the day, Vaishnaw visited the train accident site in Jalpaiguri and said that preliminary reports suggest there was “some issue” with the equipment of the locomotive. He said the actual reason behind the accident will be ascertained only after dismantling the engine’s equipment.

Asked about Ganguly’s demand, Trinamool Congress spokesperson Kunal Ghosh said the BJP leader was contradicting the railway minister and a high-level probe should be ordered into the incident. “The tragic incident should not be politicised. She (Ganguly) has contradicted the railway minister who has not indicated what she has said. Railways comes under the Centre. Let there be a high-level probe,” he said. 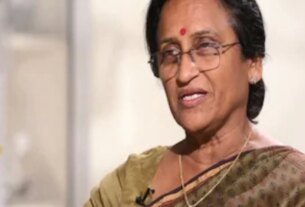 UP Polls: My Son Deserving, Ready to Give Up My MP Seat If BJP Offers Him Ticket, Says Rita Bahuguna Joshi