Day 1 of the ongoing final Test between India and South Africa at Cape Town proved to be an exciting one as promised. The build-up to the series finale of India’s final frontier in the Rainbow Nation after a 1-1 scoreline meant that both teams had to play out of their skins to outperform each other. While Day 1 largely belonged to South Africa, who were able to restrict India to a first-innings total of 223 with only skipper Virat Kohli looking like dominating the hosts, they felt a blow close to the end of the play when Jasprit Bumrah sent Proteas skipper packing for a meager 3 runs.

As usual, Cricket Twitter was ecstatic regarding the day’s play and provided some insights, praise, analysis as well as some entertainment in the form of tweets and memes. One such tweet going viral is from user @sequinsmile13 who compared a photo from the field that involved Bumrah and a few Indian players with the scientific chart of the evolution of humans.

Have a look at it here:

On a serious note, from the fielding position of Ajinkya Rahane, Ravichandran Ashwin, and the bowling action of Bumrah and the South African batter Aiden Markram on the non-striker’s end, fans drew comparisons to the human chart. While the Indian players’ positions can be characterised as one of the homo habilis or homo erectus and homo neanderthalens is, the Protea opener’s position looks exactly like the homosapiens stage in the chart.

So far the tweet has 1052 retweets and over 6300 likes. The tweet was meant with an appreciation for the clever spot by the user and the wit associated with it. While one wrote, “Oooof!! So Intense. And a great spot by whoever thought of it this way. Hehe.”

Oooof!! So Intense. And great spot by whoever thought of it this way. Hehe.

Another user also quote-tweeted the tweet with the actual picture of the human evolution chart to draw similarities.

A user who observed the same thing also tweeted the image with the same caption. That tweet, too, was met with reactions that seemed to be in agreement with the witty observation. A user under that tweet wrote, “I laughed way too hard at this.” Another wrote, “ kahan kahan se dhoondte ho.”

Many others focussed on Ashwin.

What do you think about the similarities? 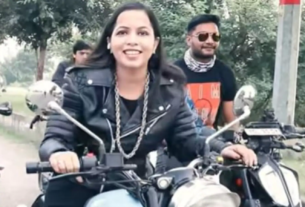 WATCH: Dhinchak Pooja is Back in New Avatar With Her ‘I Am a Biker’ Song