Two days before Christmas, a cargo ship left Mumbai with a mask-making machine bound for Illinois-based OSF HealthCare, which will use the equipment to make its own N95 masks.

It isn’t the hospital group’s first foray into manufacturing. After COVID-19 border closures in early 2020 choked shipments from Asia, producer of about 80% of the world’s medical masks and protective gear, OSF and some other hospital groups started investing in U.S. production of key supplies including masks, gowns and critical pharmaceuticals.

The goal: Avoid a repeat of the early pandemic’s life-threatening shortages of essential protective gear – an effort that has become vitally important as schools, employers, consumers and the federal government are snapping up high-quality N95s and other masks to shield against the highly contagious Omicron variant.

Over the last eight months, OSF has turned out about a million surgical masks for staff and patients at its facilities, which serve nearly 3 million people in Illinois and Michigan, said Pinak Shah, OSF’s chief supply chain officer.

The new equipment is due to arrive in February, and once approved by the Food and Drug Administration, will produce around 1 million N95s annually. OSF’s two mask manufacturing projects will make it 100% self-reliant, Shah said.

OSF declined to disclose the machinery cost. It is expected to pay for itself in two years, versus 18 months for the surgical mask machine – a difference largely due to freight costs being nearly four times higher than usual, said Salvatore, Stile, president of logistics company Alba Wheels Up, who handled the N95 machinery shipment.

The investment is a hedge against uncertainties, said Shah.

”The manufacturing cost is a little higher than sourcing with a lower-cost competitor. However, it allows control of the market risk factor and spot shortage/back orders,” he said.

Beyond that, participants say such projects help support and stabilize domestic manufacturing and downstream domestic supply chains, both of which are vulnerable to boom-and-bust demand cycles and the threat of China’s flooding the U.S. with very low-cost, and at times low-quality, alternatives.

Michael Alkire, chief executive of hospital group purchasing organization Premier, told Reuters he doubled down on efforts to strengthen U.S. suppliers after January 2020, when China diverted Premier-bound N95 shipments from Taiwan for its own use.

For more than 18 months, Premier and rival Vizient have bolstered U.S. manufacturers via strategic partnerships, expansion funding, minority-stake investments and joint ventures. While Premier declined to reveal the value of its investments, Vizient put the total at more than $12 million.

Prestige Ameritech is a beneficiary of such dealmaking. Premier and 15 of its hospital members took an undisclosed minority stake in the Texas-based company in May 2020. The hospitals also pledged to buy a portion of their surgical masks and N95s from Prestige for up to six years. Vizient separately committed to buying 9 million N95 masks over a 12-month period.

”That’s what a company needs. It needs steady revenue,” said Prestige Ameritech founder and CEO Dan Reese, who added that his and other vetted U.S. mask makers ”prioritize and support healthcare providers.”

”It certainly reduces the risk profile of obtaining those goods during times when everyone is trying to source them,” Godfrey said of the Premier deal.

Hospital executives said the projects build clout in an industry where no single operator has the power of a ”big three” U.S. automaker or a leading retailer like Walmart or Amazon.com to wield significant sway over suppliers.

”We’re not just customers, we have a seat at the table,” said Bruce Radcliff, system vice president for supply chain at Advocate Aurora Health, a participant in several Premier production projects.

”The healthcare sector is trying to take control of its supply chain,” said Luis Arguello, president of DemeTECH, a Florida-based manufacturer of medical masks, sutures, COVID tests and other supplies. DemeTECH is talking with ”several” hospital groups seeking to invest, he said.

With ample production capacity at the ready, members of the American Mask Manufacturer’s Association (AMMA) believe domestic hospital supplies will remain secure throughout the Omicron surge.

Texas mask producer Armbrust American said demand from consumers and school districts virtually cleared its 32,000-square-foot distribution center that just a few days ago was packed with unsold masks for adults and children.

”It’s great because I’m not gonna have to go bankrupt,” said AMMA president and company CEO Lloyd Armbrust, who is again ramping up production. 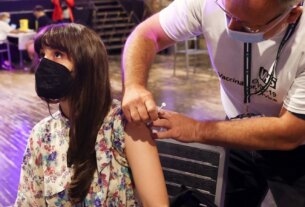