A day after Canada’s Quebec province decided to levy tax on the unvaccinated, the province’s health minister on Wednesday said that appointments for vaccination have shot up drastically.

The Minister took to Twitter to share the “encouraging” news. “It’s encouraging! (SIC),” Christian Dube wrote in his tweet, revealing that booking of slots for vaccination rose by 2,000 appointments just a day after the announcement.

Although more than 90 percent of adults in Quebec are vaccinated against Covid-19, the province has registered a steep increase in cases and hospitalizations in recent weeks due to the rapidly spreading Omicron variant.

The French-speaking province imposed a new health tax on unvaccinated people and has already banned them from non-essential stores.

A proposal by Quebec to tax unvaccinated people may be lawful but may also go against the spirit of Canada’s universal public health system, rights and medical experts said on Wednesday.

Canada’s public health system is underpinned by the Canada Health Act, meant to guarantee universality and accessibility, among other things. It precludes user fees for insured services.

Quebec’s tax could be framed as a “sin tax” similar to that placed on alcohol and cigarettes or as a tax on a health risk factor like private insurers charge, Raza said.

As such, it might not violate Canada’s Health Act but that did not mean it was a good idea, he said.

Cara Zwibel, acting general counsel for the Canadian Civil Liberties Association, said it might however violate Canada’s Charter of Rights and Freedoms if viewed as “a way of compelling people to get vaccinated”.

It was not clear if the tax’s goal is to convince more people to get vaccinated or to finance health care, she said.

McGill University biomedical ethicist Phoebe Friesen was concerned the logic of taxing unvaccinated people could be extrapolated to other behaviors seen as driving health spending – obesity, for example – but that are tied to marginalization.

“If you want to be consistent and logical, you should charge all sorts of people for their hospitalization if it’s based on behavior that they’re ‘responsible’ for,” she said “… And it’s incredibly tricky to figure out what that looks like.”

(With inputs from agencies) 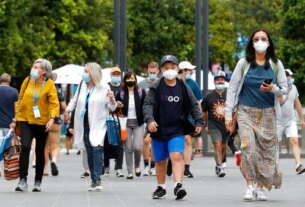 Israel ‘Leads The Way’ With Fourth Covid Jabs for Vulnerable