After tasting more than expected victory in the recently held assembly, Vidhana Parishad and some Urban Local Bodies elections, the main opposition Congress is planning to take on the ruling BJP government in Karnataka by taking out a ‘padyatra’ (foot march) from Cauvery River to Bengaluru after a week.

Karnataka Pradesh Congress Committee (KPCC) president DK Shivakumar, who seems to have convinced himself about a possible victory of the party in the Assembly elections due in April-May 2023, will be leading the march to Bengaluru, demanding that chief minister Basavaraj Bommai-led government bring Cauvery water from Mekedatu to the state capital to quench the thirst of a megapolis bursting at the seams.

Mekedatu is closer to Tamil Nadu border and Karnataka is planning to build a dam there to conserve water during floods. It aims to bring the same water to Bengaluru, about 200 kilometers away, and irrigate the parched lands in some districts of old Mysore region. Tamil Nadu has already gone against the proposed dam and the matter is being heard by the Supreme Court.

Bommai is maintaining that his government is committed to implement Mekedatu project and the desperate Congress is playing politics over it.

Speaking to the media he said, “Our government is doing everything possible to build a dam at Mekedatu. We are not worried about Tamil Nadu’s objections. We will fight it out legally. The Congress is a divided house and the one-upmanship of DK Shivakumar is on display. They coming back to power is just a dream”.

The planned march to Bengaluru seems to have already rubbed leader of the opposition and former CM Siddaramaiah on the wrong side. Since Mysore region is his fiefdom, an ambitious Shivakumar’s entry into his territory has unnerved him. After reprimanding him in public for planning the march without consulting him, Siddaramaiah has now agreed to lead it with Shivakumar.

Maintaining that all is well between the two, Siddaramaiah has now trained guns on BJP, alleging they are actually against the project and are encouraging their Tamil Nadu unit president K Annamalai to oppose it tooth and nail.

Speaking to News18, Siddaramaiah said: “The Karnataka BJP is actually against the project. They don’t care for the people. They are encouraging Tamil Nadu unit of the BJP to oppose it so that they can wash off their hands. But, they have been exposed. Once we come to power, we will implement it, come what may”.

Exuding confidence, Shivakumar said that the ‘padyatra’ would be a huge success and tens of thousands of party workers and commoners will walk along with the Congress leaders. According to him, it will re-energise the party cadre across old Mysore region.

Political observers feel that DKS has taken a calculated decision to realise his dream of becoming the chief minister of Karnataka. They argue that almost all opposition leaders who took out a ‘padyatra’ closer to elections won the battle for the CM’s throne and DKS’ real motive is power. The other aim is to weaken his main rivals in the region, the JDS of Gowda clan.

Ridiculing the march, BJP national general secretary CT Ravi said that it has exposed and embarrassed the Congress.

The ‘padyatra’ will be flagged off at Mekedatu on January 9 and is expected to reach Bengaluru on the 10th day. 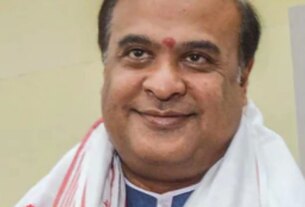 ‘Is Some Raja-maharaja Passing By’, Assam CM Himanta Loses Cool at DC for Halting Traffic For His Convoy