GST Council Meeting: The GST council is set to convene its 46th meeting under the chairmanship of finance minister Nirmala Sitharaman on Friday, December 31, the government has said. The meeting will be an offline one, and the government has reportedly asked only two representatives per state in order to maintain safety. The meeting comes in the wake of protests from several state governments and traders organisations regarding the upcoming GST hike in textile and footwear items from 5 per cent to 12 per cent. The council in the meeting will discuss, among other things, report of the panel of state ministers on rate rationalisation.

According to a government notification, all footwear, below Rs 1000, will attract GST at 12 per cent. On the other hand, all readymade textiles, except those made with cotton, will also attract a GST of 12 per cent. Previously, these items were sold at 5 per cent GST rate.

West Bengal’s former finance minister Amit Mitra has urged the Union finance minister to roll back a proposed hike in textile from 5 per cent to 12 per cent saying this would lead to closure of around one lakh textile units and 15 lakh job losses.

“Modi Govt will commit another BLUNDER on Jan 1st. By raising GST on Textiles,5% to 12%, 15 MILLION JOBS WILL BE LOST & 1 lakh units will CLOSE. Modi ji, CALL a GST COUNCIL MEETING NOW & REVERSE DECISION before SWORD OF DAMOCLES FALLS ON HEADS OF MILLIONS OF COMMON PEOPLE,” Mitra said in a tweet on December 26.

Traders organisations have been demanding a rollback of the Centre’s decision, saying that the price change will affect the poor drastically. They have said that the new tax change will increase the prices of clothing, making the poor man face difficulties while buying clothes. According to CNBC, the council in the meeting might discuss the deferment of hike in GST rates on Textiles and footwear below Rs 1,000.

“The decision is extremely irrational and will impact the livelihood of small manufacturers, artisans and other sections,” apex traders body CAIT said in a letter to the government.

The 46th GST Council meeting will be held on December 31 in Delhi, an official said, adding that it will be an extension to the pre-budget meeting with state finance ministers on December 30. The Group of Ministers (GoM) on rate rationalisation will submit report to the Council. The panel has reviewed items under an inverted duty structure to help minimise refund payout.

Besides, the Fitment committee, comprising tax officers from states and the Centre, has made many “sweeping” recommendations to the GoM regarding slab and rate changes and taking items out of the exemption list. Currently, GST is a four-tier slab structure of 5, 12, 18 and 28 per cent. Essential items are either exempted or taxed at the lowest slab, while luxury and demerit items attract the highest slab. On the top of the highest slab, a cess is levied on luxury and demerit goods.

There have been demands for merging the 12 and 18 per cent slabs as also taking out certain items from the exempt category to balance the impact of slab rationalisation on revenue. 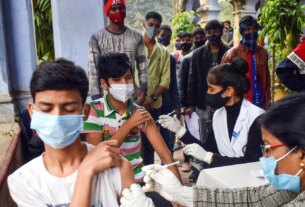 Ahead of Bihar Board Exams, BSEB Aiming at Vaccinating Over 30 Lakh 10th, 12th Students

Provident Fund, Fixed Deposit, Insurance and More: Savings Guide for You in 2022