According to Hindu mythology, Krishna once appeared in Arjuna’s dream during the Mahabharata war, with the two travelling to Mount Kailash to pay obeisance to Shiva who had granted Arjuna the Pashupati weapon. The popular saying since is that seeing Krishna in your dream is a good omen of something pleasant coming your way.

Politicians in poll-bound Uttar Pradesh, too, are claiming to dreaming of Krishna these days. First, it was BJP’s Rajya Sabha MP Harnath Singh Yadav who said Krishna came to him in a dream on January 2 saying chief minister Yogi Adityanath should contest from Mathura, Krishna’s birth town, that prompted him to write to BJP national president JP Nadda first thing next morning.

A day later, former CM Akhilesh Yadav, said he often dreamt of Krishna saying a Samajwadi Party-led government will be formed after the upcoming assembly elections.

While there is no way to confirm if these politicians are indeed dreaming about Krishna, Adityanath has been quick to rubbish the claims made by Akhilesh saying “God must have cursed him”.

“Some people in Lucknow are dreaming of Lord Krishna, who must be telling them to think of their failures. Lord Krishna must be cursing them… they had no reverence for Lord Krishna and used to nurture Kansa (Lord Krishna’s uncle),” Adityanath said.

Akhilesh, meanwhile, seems to be planning to move over to Ram from Krishna. He will be in Ayodhya on January 9 for his ongoing election yatra, there is speculation that he could be visiting the makeshift Ram temple at the Ram Janmabhoomi site.

This will be the first time, perhaps, that Akhilesh will visit the Ram Janmaboomi site. “If Akhilesh Yadav does not visit the Ram temple, it could lead to a big controversy. If he indeed goes there, the hypocrisy will stand exposed as his father had once ordered opening of fire at the kar sewaks at the same site,” said a senior BJP leader.

Akhilesh had recently said the Ram temple could have been built in a year if his government was in power and, hence, it is expected that he may visit the Ram Janmabhoomi site. While the BJP is revelling in Akhilesh Yadav’s “dharma sankat”, Adityanath seemed to pre-empt the move in a speech on Tuesday. The CM said some people were remembering Ram and Krishna suddenly and even putting chameleons to shame with their changing colours.

Leaders of the BJP have gone to the extent to say the Ram temple’s construction will be stopped if the SP comes to power. Incidentally, Akhilesh in the past has not shied away from trying to own Krishna and had even promised a tall statue of the deity in his native Saifai village.

Krishna is invoked as a Yaduvanshi by both Yadav and the BJP, with the party claiming it has transformed Mathura and Vrindavan that the SP failed to do. The ruling party says the same about Ayodhya.

Adityanath often says Akhilesh ignored the holy town when he was the CM while he has visited Ayodhya almost every month since becoming CM.

So, what will settle the debate on who is a bigger follower of Ram or Krishna? Perhaps a direct contest between Yogi and Akhilesh from Ayodhya or Mathura? Let’s wait for another dream to show the way. 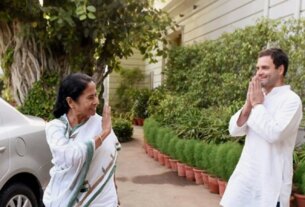 Goa Elections 2022: TMC & Congress Locked in Cat-and-Mouse Game. Who is It Really Hurting?