Despite their busy work schedules, actors Katrina Kaif and Vicky Kaushal took time out to ring in their first New Year together after marriage. Katrina on Saturday evening was spotted at the Mumbai airport dropping off her husband as he flew off for a shooting schedule to resume work. The actress was also clicked giving the ‘Uri’ actor a tight hug before he got down from their car. Vicky also posed for the paps before entering the airport.

After creating their individual official Instagram accounts, the Bangtan Boys are on a posting spree. From sharing museum photos to posts with friends and pets, the septet is giving a good glimpse of their personal lives to their fanbase called ARMY. Recently, the Golden Maknae of BTS took to Instagram to share a video of him boxing with a freelance trainer Tommy. Jungkook can be seen flaunting his punching skills in the video which has taken the internet by storm. He is dressed in a black casual tee paired with grey trousers and has kept his face covered with a mask.

After weeks of speculation, actress Kajal Aggarwal’s husband Gautam confirmed her pregnancy. Kajal, who tied the knot with her longtime boyfriend Gautam Kitchlu in October last year, is expecting her first child with the businessman.

The makers of Prabhas-starrer ‘Radhe Shyam’ have confirmed that there is no change in the release date of the movie. Fans seem to be worried about ‘Radhe Shyam’s release after SS Rajamouli’s RRR got pushed amid rise in Covid-19 cases, but its makers have denied rumours of postponement.

A sudden spurt in the number of cases of the Omicron variant of the Covid-19 virus in the country has forced actor Silambarasan to postpone a success meet he had planned to hold for fans. Silambarasan better known as Simbu had planned to celebrate the success of his latest film ‘Maanaadu’ with fans on January 6. However, with the numbers of those being infected by the Omicron variant fast rising in the country, the meet has now been postponed. 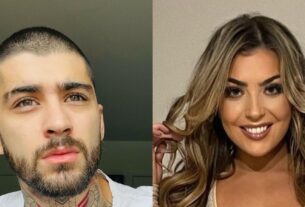 Zayn Malik Had An Affair With TOWIE Star Abigail Clarke While He Was With Gigi Hadid: Report

Happy Birthday Sonali Bendre: These Throwback Pics of the Actress Will Take You Down the Memory Lane