Bollywood actress Katrina Kaif virtually celebrated her sister Isabelle Kaif’s birthday on Thursday. It was not just Katrina, but her husband Vicky Kaushal, and brother-in-law Sunny Kaushal as well who came together to celebrate Isabelle’s 31st birthday.

Katrina shared the screenshot of the virtual video call on Instagram Stories on Thursday where the family members, although physically separate, connected through the virtual call and wished the actress a happy birthday. Sharing the picture on Instagram Stories, Katrina wrote, “Happy, happy, happiest Isabelle Kaif, this is the year that will shower all the love, light, and happiness on you.”

Vicky also wished his sister-in-law via Instagram on Thursday. The 33-year-old actor shared a picture of Isabelle on the social media platform where she was seen in a black t-shirt and a Star Wars cap. Sharing the picture on Instagram, Vicky wrote, “Happiest birthday Isy! Have the most wonderful time working and partying today.” 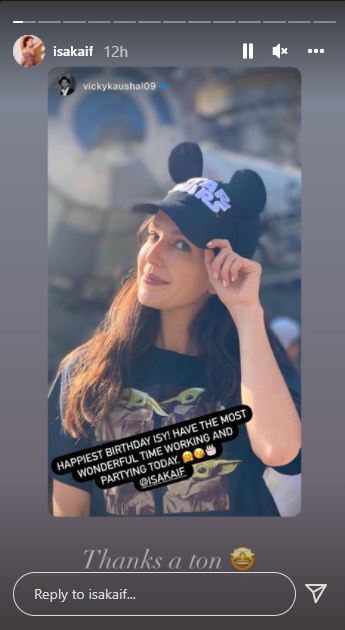 The actress was working on her birthday. Isabelle made her acting debut in Bollywood last year with Time To Dance. Playing the role of a dancer in the film, Isabelle starred opposite Sooraj Pancholi, who played the role of a street dancer. The movie was released in March last year. Isabelle will next be seen in Suswagatam Khushaamadeed which also stars Pulkit Samrat.

Isabelle’s co-actor from her upcoming film, which is directed by Dhiraj Kumar and written by Manish Kishore, also wished her through an Instagram post. Pulkit shared a picture with Isabelle on the social media platform where the duo were seen having a laugh. Sharing the picture,Pulkit added in the caption, “Happy Birthday Isa. Wish you a kickass year ahead.Keep smiling. Isabelle Kaif.”

Isabelle recently attended the wedding of Katrina and Vicky in Rajasthan. The actress shared snapshots from the dreamy destination wedding on the social media platform.

Have you checked the latest Instagram updates by Katrina?

Not a Conman; Was in Relationship With Jacqueline Fernandez, Claims Sukesh Chandrashekhar