He’s an old warhorse, say his party men. Not surprising then that, at 94, Parkash Singh Badal has hit the road campaigning to protect his citadel from being breached.

The former Punjab chief minister and patriarch of the Shiromani Akali Dal (SAD) has started door-to-door canvassing in his home constituency, Lambi. Though it remains to be officially announced whether he would contest this election or not, that hasn’t stopped Badal from carrying out the traditional mode of on-foot campaign.

At a time when the Election Commission (EC) is insisting on a ban on rallies and parties grappling with the idea of how to reach out to their voters through social media and virtually, Badal senior has shown the way. Abiding by the Covid protocols, he has decided not to meet voters in large numbers but to reach out to his constituency through door-to-door campaigns. He does move around in his car, stops en route, interacts with people, and moves on.

On Thursday alone, he had completed meeting people from one village and wants to complete interacting with voters from 15 villages of his constituency in the coming days. For the record, he has, however, already held public meetings in nearly 60 of the total 73 villages in the Lambi assembly segment.

“He has been an inspiration for many youngsters in the village and whether he will contest the elections is still not known, but he has never lost touch with the people of Lambi,” said a senior SAD leader. He said that the people of the constituency cannot think of any other leader in place of Badal senior representing them.

Veteran Akali Dal leader Daljeet Singh Cheema said, “We have left it up to Badal Saab. It will be his call if he wants to contest the elections or not. The party would obviously want that he contests the elections.”

During his meetings with the people, he does rope in his relatives, his trusted lieutenants. “Not many are able to match up to the enthusiasm level shown by him even today and his idea of sticking to the traditional mode of campaigning,” said a SAD leader who has been accompanying Badal during his day-long visits.

Lambi has been a citadel of the Badals and the Akali Dal patriarch clearly knows the importance of holding on to it. 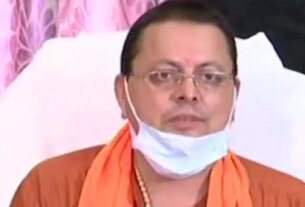 Rawat Expelled from BJP as He Mounted Pressure for Party Tickets to Kin, Says Dhami