BJP in Uttar Pradesh is planning 3D Studio Mix Technology and audio conferencing to reach maximum people ‘digitally’ amidst anticipation that big physical rallies and road shows may be restricted by the Election Commission of India (ECI) in wake of the rising Covid-19 cases. Senior party leaders have discussed the ‘digital strategy’ with the BJP unit in Uttar Pradesh over the last few days, News18 has learnt.

UP state convener of BJP IT department Kameshwar Mishra told News18: “This time we have done a new experiment, we have planned to use 3D Studio Mix technology. With this technology, leaders sitting at two different places can be shown on one podium. That is, by creating a virtual stage through 3D, the addresses of veteran leaders will be as if they are addressing the right on a stage.”

He said the party has also made arrangements for audio conferencing. “Under this, the bell will ring on the mobile phone of a person and after that the address can be heard. In this, one and a half lakh people can be connected simultaneously. The trials of such meetings have already been done successfully,” he added.

The BJP has drawn up its plan to hold digital rallies. On the instructions of the party, the UP BJP Social Media Cell has made preparations for the e-rally of around 1.5 lakh people. The party has prepared with the state of the art infrastructure from the state headquarters to the district level and has also given training to three lakh workers. BJP has prepared infrastructure for virtual meetings and multiple conferences from state to districts. The saffron party has also got special software made for meetings, webinars and e-rallies.

BJP’s virtual rallies will be propagated through social media platforms. For this, UP BJP has strengthened itself by adopting the latest technology this time. A team of three lakh trained social media workers have been deployed not only at the district but also at the booth level. BJP IT Cell said to have prepared a team of more than three lakh trained workers who will help the party in digital campaigns. At the same time, a war room has been prepared in the social media cell in the BJP state office. Not only this, the setup of a virtual rally has already been prepared in all the district offices.

The digital rallies by the BJP will start if the Covid-19 cases keep on increasing even after January 10. Instructions have in fact been given to the social media departments of all the five poll-bound states by the BJP that technical and trained workers equipped with state-of-the-art technology should be deployed up to the booth level. Monitoring is being done continuously by the top leadership in this regard.

As Covid-19 is spreading once again restricting large gatherings and movement, all political parties have now geared up to take on the electoral fight ‘digitally’ for the upcoming 2022 Uttar Pradesh State Assembly elections. From adopting the latest technology to propagating the message of their leaders digitally to imparting training to lakhs of party members, political parties seem in no mood to miss a chance to woo voters this election season. 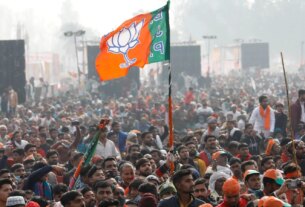