The singer also gracefully handled a wardrobe malfunction moment when she was dressed in a sexy silver sequined backless top and mini skirt. The distressed top came off during the live show, while she was performing on stage. However, Miley kept dancing as she made her way backstage while the backup singers and band continued to play. During the song Party in the USA’s first chorus, the singer returned to the stage in a red blazer she had previously donned in the program. Poking fun at her wardrobe malfunction, Miley shared the picture of herself in the costume on Instagram and added in the caption, “Get a good look at the top that didn’t stay on very long.”

The Instagram post also featured a picture where Miley wore a blue sequin bandeau top and pink, purple and black mini skirt with a multicolor feathery jacket and silver platforms.

The singer and actress also donned a dramatic creation by Gucci as she performed her latest song You. Miley wore a red boa robe over a red dress which featured a sheer panel and a feathery-hem train.

That was not the only red costume that the singer wore on the New Year’s eve live show at Miami, Florida. Miley was spotted in a body-hugging Saint Laurent jumpsuit which she paired with an oversized red blazer.

Miley’s silver fringe jumpsuit by Versace during her performance on Jolene with sister Noah Cyrus certainly seemed like a nod to veteran country singer Dolly Parton.

Posing with Pete for the promotional images of the New Year’s eve show, Miley was seen in flapper-esque sequin Bob Mackie gown with fringe skirt.

Which of the looks served by Miley has been your favourite? 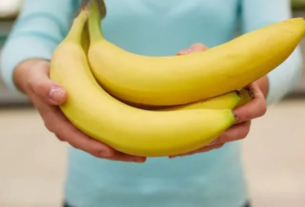 Five Quick, Easy Ways to Store Bananas For A Week Without Spoiling

Coconut Oil Can be a True Blessing During Pregnancy. Here’s How

Omicron Effect: Restaurants Downing Shutters For Ever Due to Lockdowns, say owners