ISLAMABAD: The Islamabad High Court (IHC) reprimanded on Thursday the National Disaster Management Authority (NDMA) and said it is responsible for the Murree tragedy.

As many as 23 people, including children, died in Murree last week as heavy snow lashed the hill station, turning family vacations into a tragedy.

IHC Chief Justice Athar Minallah was hearing of petition filed by Hammad Abbasi, a Murree resident, that sought action against those responsible for the tragedy.

Abbasi said he went to Murree on January 7 and that when tourists were going to the hill station, neither were they stopped and nor were they warned of the danger.

During the hearing, Justice Minallah asked Prime Minister Imran Khan to call a meeting of the National Disaster Management Commission (NDMC) and determine who was actually at fault.

No NDMC meeting held since 2018

The IHC CJ called a member of the NDMA to the rostrum and asked him when the last meeting of the NDMC was held. At this, the official told the court that a meeting took place on February 21, 2013, and the last meeting was held on March 28, 2018.

After hearing the NDMA member’s response, Justice Minallah said all concerned people are part of the commission. “It is a powerful body. How come no meeting took place since 2018,” the IHC CJ questioned.

“Could there be a more powerful body than this? Has the DG NDMA once written a letter to the government and informed them that if a calamity occurs, we will be responsible for it?” he asked.

Read more: Murree struggles to get back on its feet after deadly snowstorm

“You have failed, it was your responsibility to call a meeting, you were responsible for providing a national management plan to the area,” the justice told the NDMA member.

The justice told the NDMA member that his authority was responsible for the disaster and they could not shift the blame on anyone else. “It is your responsibility to call the meetings and ensure the enforcement of the law.”

Justice Minallah said that had the NDMA ensured that everyone followed the law, such incidents would not have happened. “Everyone wants to make speeches, but no one follows the law.”

“Everyone included in the [commission] and the entire state is responsible,” he said.

Justice Minallah directed the NDMA member to submit a report on the incident by next Friday and determine the people responsible for the catastrophe. He also ordered Prime Minister Imran Khan to call a meeting of the commission next week.

“This is a very important matter. Submit the report by next Friday,” he ordered.

The court then adjourned the hearing till next week.

No work done by KP’s govt in health sector: CJP 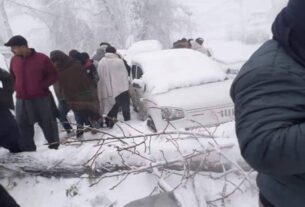