FAISALABAD: Rejecting reports of a deal with PML-N supremo Nawaz Sharif, State Minister for Information and Broadcasting Farrukh Habib Saturday said that the only place for the “champion of thieves” was jail.

Talking to journalists after visiting various development projects in his constituency, NA-108, Faisalabad, Habib said that a wrong impression was being created by some vested interests that a deal was being reached with the PML-N leader, The News reported.

Whenever he [Nawaz Sharif] will return to the country, a prison van will be waiting for him at the airport to take him directly to Adiala jail, Habib added.

He rejected criticism of Punjab Chief Minister Sardar Usman Buzdar and said that he had the privilege to present a record development budget of Rs750 billion, whereas the PML-N had presented a much trumpeted budget of Rs488 billion. He said that Punjab utilised 98% of the allocated funds previous year, which reflected that the government was not only allocating funds but also making efforts to utilise it for the welfare of the masses.

He said the Federal Board of Revenue (FBR) had collected Rs2,900 billion, which was 32% higher than the amount collected last year. The target was Rs2,600 billion and the collected amount was more than it, he added. He rejected allegations that the increase in collection was due to an increase in sales tax and said that an additional Rs300 billion had been collected under the income tax head.

He said that a 68% increase was recorded in car production, 15% in tractors and 64% in trucks/ buses, while cement production was also increased by 6.9%.

He said that the government was taking fundamental and radical measures to streamline the business and in this connection, the first-ever auto and SME policies were also introduced and now young startups could get loans up to Rs10 million without any guarantee.

He said that the prime minister had taken yet another unique initiative and public friendly steps to provide shelter to homeless individuals and for this purpose, Rs100 billion had been approved while Rs34 billion had so far been disbursed.

He said that 10 new dams were under construction which would not only overcome shortage of water but also produce cheap electricity. He said that food inflation had been reduced and it recorded 10 to 20% decrease as compared to last year.

He said the government was serious in nailing down inflation as it had taken strict measures to control it, but the impact of global inflation was out of control.

Shehzad Roy is the new brand ambassador for population, family planning in Pakistan 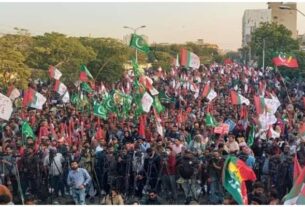