Manipur is about to go for polls and Prime Minister started his speech with Manipuri and showed the path of peace and development. He highlighted the benefit of a double engine government. As he travelled from runway to stage he stated it was a “human wall with energy that gave him happiness”.

He laid the foundation stone for five national highways expanding across 110 km, which is expected to boost road connectivity that includes a steel bridge to ensure connectivity between Imphal and Silchar. The bridge will ease traffic congestion in the region and is built over Barak river on national highway 37.

The other infrastructure projects announced are:

• New 200-bed Covid hospital in Kiyamgei built with the help of DRDO.

• Foundation stone of Manipur’s biggest PPP initiative that is the centre for invention, innovation, incubation and training.

The Prime Minister pointed out the development that took place after the BJP government came to Manipur and highlighted the ignorance of the previous governments. He said,

“There was a time when Manipur was left to be on its own. I came to Manipur multiple times before I became the PM. I knew the pain in your hearts. So, after 2014, I brought the entire Government of India to your doorstep.”

The fact that the central government has given special emphasis in North East with “Act East Policy” is also highlighted by Prime Minister, stressing, “Previous government policy on North East was don’t look North East. They use to only see during the election. We have taken Act East policy.”

Development on one side and peace on another side is something that is in BJP’s projection. He said, “You have to remember that to get power some people would want to create disturbance but I know people of Manipur has identified them, they will not allow this. In the past, they have created conspiracy, they have divided hills and villages. Our people have reached both the places.”

Peace and development are the main campaign lines of BJP in Manipur and the PM has set the mood there for the upcoming elections. 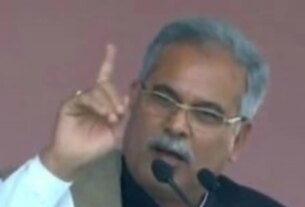 In UP for Poll Campaign, Chhattisgarh CM Baghel Booked for Flouting Covid-19 Norms