Until last week, the top leadership in the Congress was in a bind over Punjab unit chief Navjot Singh Sidhu’s insistence on being declared the chief ministerial face for upcoming Punjab elections 2022. Not anymore. Incumbent Charanjit Singh Channi’s handling of the recent fracas over Prime Minister Narendra Modi’s security breach in Ferozepur seems to have helped the Gandhis see the bigger picture.

Party sources say it was Rahul Gandhi and Priyanka Gandhi Vadra’s idea to pick a Dalit leader as the CM in September when Captain Amarinder Singh was acrimoniously ousted from the top job. The idea was that Sidhu could devote time and resources in keeping the flock together after Captain’s imminent exit.

But as days passed, it became clear that Sidhu and Channi were unlikely to bond. While it’s common for the Punjab Congress chief and the Chief Minister to not campaign together in order to reach wider audience, this time the two are campaigning separately for the lack of a common goal. Both see themselves as the CM face of the party.

Since last week, the scales have tipped in Channi’s favour. Fighting back, he has thrown the ball back into the BJP’s court over allegations that his government compromised Modi’s security when the PM’s cavalcade was stuck on a flyover on the Moga-Ferozepur highway in the midst of a farmers’ blockade.

Channi reportedly explained the facts to Priyanka Gandhi and said the BJP had made the allegation of security threat because of “poor turnout” at an election rally Modi was scheduled to address. The PM had returned without attending the rally following the security breach.

Sources say the Congress then decided to toe Channi’s line and changed tack from a statement of “regret” to attacking the BJP on the heated issue.

The story goes beyond Channi taking the offensive to the BJP. His hard stand, connect with the masses and playing the ‘Punjabiyat’ card clicked. Since assuming power, Channi has learned the art of playing to the gallery, from stopping to help road accident victims to meeting protesters. Internal surveys suggest Channi’s stock has risen over the last few days. For once, Sidhu was late in responding.

Congress sources say it has been conveyed to Sidhu now that he alone won’t decide distribution of tickets for Punjab elections 2022, a significant victory for the Channi camp.

But the Gandhis don’t want to antagonise Sidhu or Channi supporters at this point. It is possible that when tickets are distributed, the party discusses a rotational CM arrangement with Channi and Sidhu. For now, the high command is okay with the game of one-upmanship between the CM and Punjab Congress chief, so long as the party isn’t the one to pay the price.

UP: Political Party Hoardings, Posters Being Removed as Code of Conduct Comes into Effect 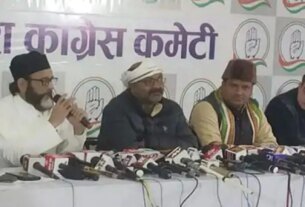