Salman Khan rang in the New Year in the company of close friends and family. The Bollywood superstar celebrated the New Year’s eve with his friends at his farmhouse in Panvel. Actor-politician Bina Kak took to Instagram to share pictures from the party.

In a picture, Salman was seen in a black shirt, white jacket and a silver chain around his neck. He was joined for the photo by Bina, who has worked with him in Maine Pyaar Kyun Kiya. Her daughter Amrita Kak also joined them for another picture.

Most recently, Salman was bitten by a snake at his farmhouse. He got discharged after a brief hospitalisation. Speaking about the incident, Salman had told ANI, “A snake had entered my farmhouse, I took it outside using a stick. Gradually it reached onto my hand. I then grabbed it to release, which is when it bit me thrice. It was a kind of poisonous snake. I was hospitalised for 6 hours…I am fine now.” 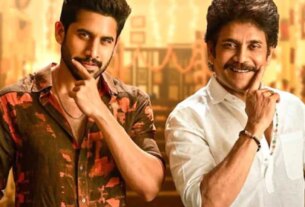 Karan Johar Drops Adorable Family Pic to Wish New Year: ‘You Be the Neeraj Chopra of Your Life’