While the big screen releases have come to a halt again, one medium that continues to churn out content despite the pandemic is the OTT. The year has started on a good note with some hard-hitting and entertaining releases lined up this week. Medical thriller Human, love triangle Yeh Kaali Kaali Ankhein, and a famous real-life Bollywood love story in Ranjish Hi Sahi are some of the new web series streaming now. Also available from this week is the Hindi version of Allu Arjun’s blockbuster Pushpa: The Rise Part 1.

Human is a medical thriller based on human drug trials in India. The series boasts of a stellar cast headlined by Shefali Shah and Kirti Kulhari, along with Vishal Jethwa, Ram Kapoor, Seema Biswas, Aditya Srivastava and Mohan Agashe, amongst others. The suspense thriller unravels unexpected secrets of the world of medicines and its effect on people with a gripping tale of murder, mystery, lust, and manupilation. Directed by Vipul Amrutlal Shah and Mozez Singh, the Disney+ Hotstar Specials series has been penned by Mozez Singh and Ishani Banerjee.

A man caught between a woman who loves him and one who desires him. Vikrant (Tahir Raj Bhasin), a romantic simpleton in Yeh Kaali Kaali Ankhein, becomes an object of desire for Purva (Anchal Singh), who will go to any lengths to get him. As Purva’s efforts to make him hers begin to destroy all that he holds dear, the mild-mannered Vikrant finds a new side of him emerging. In order to escape Purva’s clutches and reclaim his life with his true love, Shikha (Shweta Tripathi), he goes down a dark path only to regret it later. Sidharth Sengupta, director, writer and producer who is known for creating popular television shows including Balika Vadhu and the series Apharan, makes his Netflix debut with Yeh Kaali Kaali Ankhein.

Created by Mahesh Bhatt, written and directed by Pushpdeep Bhardwaj, a Vishesh Entertainment production – the series revolves around a fledgling maverick film director who gets drawn into an extra-marital affair with an eccentric superstar who changes his life forever; his marriage with his first love spirals as he is torn in between two worlds. Set mainly in 70s Bollywood, the story revolves around the lives of Shankar (Tahir Raj Bhasin), Amna (Amala Paul), and Anju (Amrita Puri). The story explores complicated human relationships between adults and the different shades that love can take. An intense drama, it explores temptation, forbidden love, passion, trust, marriage, loyalty, unconditionally, stability, obsession, and separation in a myriad of emotions.

The blockbuster action thriller Pushpa: The Rise-Part 1 is now available in Hindi on Prime Video. Written and directed by Sukumar and produced by Mythri Movie Makers and Muttamsetty Media, the film stars Allu Arjun in the titular role along with Rashmika Mandanna and Fahadh Faasil in pivotal roles. The mega-entertainer, which has garnered accolades from fans and critics alike, is already streaming in Telugu, Tamil, Malayalam and Kannada on the streaming service.

Get set for this galvanizing and intensely wild ride, deep into the Seshachalam forests with lorry driver Pushpa Raj—essayed by Allu Arjun. Pushpa: The Rise- Part 1 chronicles the fight of good against evil in a fast-paced, gripping narrative as the police crackdown on the red sandalwood smuggling empire that is rampant in these parts. The fast-paced, powerful, and thought-provoking narrative pulls the viewers into a vortex where there is no right or wrong, and there are no bad men—only heroes in different hues of gray.

Following the success of the Tamil anthology Putham Pudhu Kaalai, Amazon Prime Video today announced the launch of its second instalment, Putham Pudhu Kaalai Vidiyaadhaa… The new five-episode series features stories of hope, determination, and personal discovery, as told through the unique perspectives of five different directors. Reflecting on the second lockdown of the COVID pandemic that shook India, the anthology is focused on a message of hope and love amidst despair. 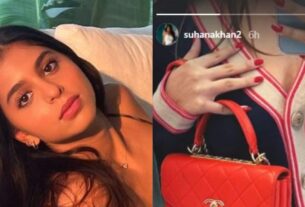 Suhana Khan Goes All Glam Playing Dress Up, and We Love It