In a sheer display of strength and vigour, a 12-year-old Russian girl left people amazed by knocking down a tree with her bare knuckles. The little girl’s lethal punches went viral after videos of the extraordinary act were shared online. According to a Daily Mail report, the girl Evnika Saadvakass from Voronezh, Russia, has been training to become a professional boxer since a very young age. Her father Rustam Saadvakass, who is also a professional boxing trainer, saw the potential in her daughter when she was just three years old. Since then, Rustam has been personally training Evnika along with her seven siblings.

The latest video of Evnika showcasing her talent was shared on Twitter where she wowed people with her incredible ability. In the video, the girl could be seen throwing some impactful punches at a tree in a forest. Wearing a pair of gloves, Evnika continues to punch the tree by using different variations and techniques while also keeping a professional form. Within a minute, the young boxer manages to shatter the tree down with her jabs.

Watch Little Evnika Saadvakass also known as the ‘World’s Strongest Girl’ punching down a tree using her Amazing boxing skills.Shes has been training hard since she was three and dreams of becoming a professional boxer one day. pic.twitter.com/A4ERWjB57b

As the video did rounds on Twitter, Evnika was hailed by people for exhibiting her exceptional boxing skills. “Humans has huge potential and possibilities it has been proven time and again let’s have #ConsciousPlanet drive to bring right awareness amongst people,” wrote one user. Pointing out that the tree had been rotten which eventually helped Evnika knock it down, another userwrote, “Tree is rotten, maybe by a specific wood rot fungus? Looks that way.”

Humans has huge potential and possibilities it has been proven time and again let’s have #ConsciousPlanet drive to bring right awareness amongst people— Ravish (@ravhot) January 9, 2022

Notably, this is not the first time that Evnika has turned heads with her talent, she had risen to online fame long back with her other videos. Earlier in 2016, her father had shared one of her videos on their YouTube channel ‘Saadvakass Family’. The video titled ‘The door and Evnika’ showed her throwing punches at her bedroom door with lightning speed. Soon, Evnika made a hole in the door with her strikes and that too without wearing any gloves.

Rustam has uploaded numerous other clips on their YouTube channel where he share snippets from Evnika’s training while giving boxing tips to her fans online. 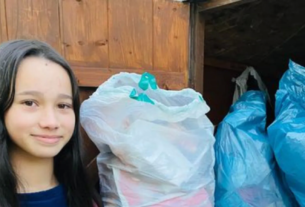