ISLAMABAD: Federal Minister for Finance and Revenue Shaukat Tarin on Thursday clarified that the imposition of sales tax on goods falls under the federal government’s jurisdiction and that the Federal Board of Revenue (FBR) chairman has made taxpayers’ lives easier.

Tarin’s comments came a day after the FBR chairman had sought the rights to impose sales tax on retail prices of goods from the Senate Standing Committee on Finance.

Speaking at a ceremony in Islamabad, the finance minister reiterated that sustainable development is only possible if people pay taxes.

“We will facilitate taxpayers; however, everybody has to pay taxes,” Tarin said, adding that in the next few weeks, the revenue board will approach people without prior notice.

He, however, clarified that taxpayers will not be harassed under any circumstances.

The finance minister maintained that the simplification of the tax system increases tax revenue, adding that if people don’t pay taxes, a country cannot progress.

“Only two million people pay taxes in Pakistan, but this system will soon change,” the minister said, adding that the government and FBR plan to reach out to people with the help of technology and if they still don’t pay taxes, legal action will be taken against them.

“Everybody should pay taxes before we approach them,” Tarin stated, urging tax evaders to register themselves before the government or FBR questions them.

Tarin said: “If I stay in this office, I assure everybody that not only people would pay income tax but everybody would have to pay sales tax as well.”

He was of the view that people live in bog houses, travel in luxurious cars, and dine in at expensive restaurants, but when it comes to paying taxes, people pay a very little amount. 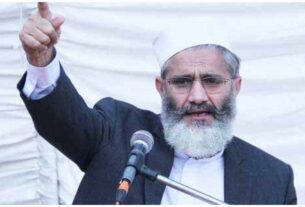 Imran Khan’s departure only solution to all problems: Sirajul Haq

Lord Nazir found guilty of sexual assault but will appeal